In the World Language classes… Our 6th graders in Spanish are learning about how to describe their family with appropriate adjectives. Students created songs using the verb “SER” and wrote their first mini-paragraph of 15 sentences describing their favorite television show. Our 7th grade students created videos of their daily student life at D-E. Some of our 8th graders have described two of their favorite clothing outfits in the target language. Others are learning about Global Warming, and how to best help our mother nature. They are using the imperative forms to talk about this important issue. In Latin, our 7th graders are learning and singing the second declension and neuter noun forms. They are also using interrogative terms and will soon begin their study of the imperfect and perfect tenses.  They continue to build vocabulary, interpret case endings, and translate and construct increasingly more complex sentences and passages. In Latin 8, they have been studying Roman politics and are using what we have learned as a chance to discuss, “Would a Roman rather have wealth or fame?” and “Would you rather have wealth or fame?” In Latin 8 Advanced, students have been discussing the morality of the Roman invasion of Britain with questions like, “Who benefited from the invasion of Britain?” and “If you were emperor, would you have invaded Britain?”. Soon they are going to begin studying adjectives as they continue to delve further into Latin Grammar. Our French 7th grade students (W) are completing their PBL on their adopted French-speaking country.  They are also studying emphatic pronouns, prepositional contractions, and the immediate future tense.  Our goal is to use French exclusively, build vocabulary, and practice writing skills. 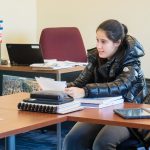 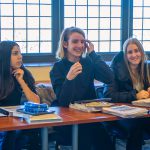 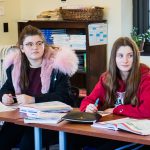 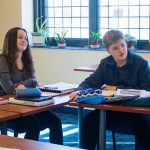 In the arts, a new semester means a new group of Drama classes in both 7th and 8th grade. Our 7th grade students are learning stress-reduction techniques. And our 8’s are diving right into their “Crush” video projects!

Our vocal/choral ensembles are diving into preparation for our next concert in May. This semester we will be exploring New York City through the lens as a city of revolution. Studying music that tracks the city from earliest days to the modern city it has become, we will see how music was at the forefront of the major time periods in the city’s development. Along with the Visual Arts Department, students will create costumes, props and other visual elements to enhance the performance.

Studio Art 6 will be kicking off the three-dimensional art-making semester with our new “Protect Our Planet: Earthships to the Rescue” PBL unit. For the project students will be reflecting on the concept of sustainability and how their everyday use of natural resources has a direct impact on the planet. At the start of the project we will have a guest speaker join our classes to discuss successful environmental sustainability projects that she has been involved with. The physical artwork for the unit will challenge students to design and construct their own Earthships, which are self-sustaining houses. After carefully drawing and elevation and floor plan for their Earthship, each student will make a 3-D model using a combination of recyclables, art materials, and other unique supplies. To learn more about Earthships go to https://www.earthshipglobal.com/

Studio Art 7 students are beginning their semester of studio art with drawings about themselves to share out. Then, in the first unit, we will engage in the three main ways of drawing: contour, blind contour, and gesture drawing. Through practice with these techniques, students will be able to improve their drawing skills.  In the upcoming weeks, students will choose a shoe to bring in and draw it realistically using what they have learned for the first project

Studio Art 8 students this semester will focus on three-dimensional art-making.  Students have been assigned to two groups, each with a Project Manager and Assistant Project Manager. The young designers are being asked to focus on the question “How can we as artists create headdresses that are durable, wearable, exciting and in-the round to be worn during Lion King Jr.?”